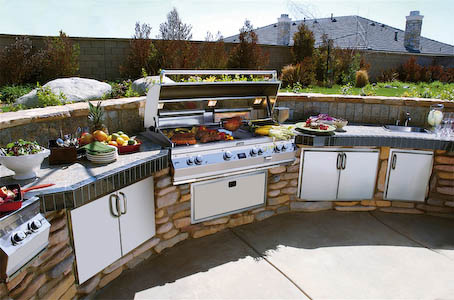 Everyone loves ribs. But most folks have no idea how to cook them at home. So when the National Pork Board invited me to a cooking demo at Rib Fest 2011, I couldn’t refuse. Firing up the charcoal was Chris Lilly of Big Bob Gibson Bar-B-Q in Decatur, Alabama, and Ray Lampe of Southern Hospitality here in Manhattan. Both men are legends within the grill game and the stage was set for a serious pork throwdown.

Lilly started out by emphasizing the seductive allure of his ribs. “I could serve you pork ribs six days in a row, Monday through Saturday,” began Lilly in his quintessential southern drawl, “and on the seventh day you’d come in here and guess what you’d ask me for…”

You get the picture.

We had two different racks to choose from. Ray prepared the smaller, leaner Baby Back variety, while Chris grilled up the larger, more indulgent Spare Ribs. Both involve a three step cooking process that anybody can complete on their own grill:

Create your own dry rub starting with even amounts of salt and sugar and adding whatever spices you like. Don’t be shy. Use a charcoal grill whenever possible, wrap your wood chips in foil and place them on the coals. Keep the coals to one side of the grill and the meat on the other for indirect heat. Never cook ribs over direct heat.

*Common Misconception: Rubs should be rubbed in. FALSE: you don’t need to grind seasonings into the meat. As a matter of fact both of our chefs simply sprinkled it on by the handful and moved straight to the grill.

After about two hours (less for the Baby Backs), remove your rack and wrap it in foil. Add a splash of apple juice, Jack Daniel’s or some other refreshing combination to moisten and tenderize the pork. Follow up with more of the rub (both sides, please). Wrap tightly and return to the grill.

Give the ribs about 30-60 minutes in the foil. It’s important to note that if you leave the meat in the foil for too long, the added liquid will wash out that smokey flavor you worked so hard to impart in Step 1.  Remove from the foil, add more of your dry rub or homemade BBQ sauce, divide into serving sizes and dig in. A connoisseur will serve Spare Ribs as singles and Baby Backs in pairs.